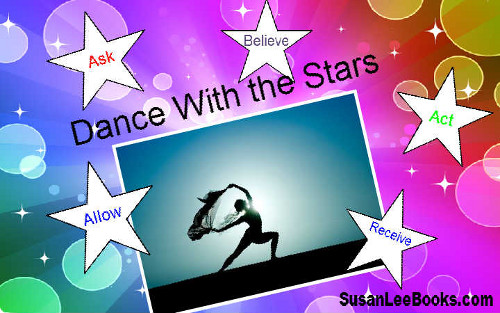 Dancing With the Stars Season 16 is half complete and people are already wondering who will go the distance and win the coveted Mirrror Ball Trophy. Whether the champion is Alli, Jacoby, Zendaya, Kelli, or one of the others, we are down to real contenders who are in it to win it.

The show is filled with excitement and entertainment every week, beautiful costumes and sets, and great dancing, of course. But, despite all the glitz and glamour, the road to a Mirror Ball trophy on Dancing With the Stars is a long one for the wanna-be Champions and their pro partners.

What makes a Dancing With the Stars Champion? After loyally watching all 16 seasons, it is clear to me that most of the winners share a number of characteristics and qualities with the law of attraction principles. Here are 18 traits of a Dancing With the Stars Champion, and how they fit in with the principles of the law of attraction:

The first principle is critical in order to get a person up each day and working toward a goal. You have to know what you want and ask for it. Those celebrities that make it to the Dancing with the Stars finals know from day one the importance of asking for what they want.

Asking for what you want is one thing, but harder still is reaching a goal if you have negative resistance because you don’t believe you can achieve it. The next few traits of the dancing celebs demonstrate their total belief and confidence in their direction.

After you are clear in what you want, and believe in your heart you can do it, it’s time to roll up your sleeves and start getting the job done.

Regardless of how much you “ask,” “believe,” and “act,”, the law of attraction can be defeated if you aren’t able to allow what you desire into your life. Many things can hold us back from allowing, but we can learn a lot from the successful Dancing With the Stars champions.

Persistence is critical, and you will see the winning couples working certain difficult dance moves over and over again, until they become second nature to the star. Everything is odd and difficult at first, but if you are able to persist through the discomfort, you can achieve your goals.

The end goal, of course, is to reach your objective. So the final principle, receive, may seem a bit anti-climatic. After all, if you have believed enough, you have already visualized the moment many times in your mind. What makes the end worth the effort lies in the way you receive.

More than just a fun show to watch, Dancing with the Stars can teach us some real lessons as to how we can achieve our dreams and goals. But, without the full resources of ABC TV and the Dancing With the Stars machine behind us, it can often seem daunting to follow those principles.

I have discovered that the more positive ways I can record and track my progress, the easier it becomes to stick with my goals over the long haul. More positive vibrations in my life over negative ones helps keep me on track and I used the tools created by RaisedVibrations.com to do it. Through RaisedVibrations.com, I am able to build and give voice to my dreams, set solid goals for achieving them and use a number of visualizing techniques, including their popular and fun V.I.B.E. Board.

While my dreams don’t often include Ballroom Dancing on national TV, I can commit to the same principles used by Dancing With the Stars Champions. By doing that, I can shoot for the moon! And, as Les Brown has said, when I do that, I’m bound to “end up among the stars.”

Susan Lee is a wife, mother, business professional, and author of God’s Law of Attraction. She has been an active member of RaisedVibration since November of 2012.

Is It Selfish To Ask The Universe For What You Really Want?
Scroll to top